A dog designing even a substandard test chamber'd be pretty damned impressive, let's not kid ourselves.


But don't worry, you're not fired yet. It turns out there's an even better job you can do instead of being fired: Getting launched into an infinite series of alternate Earths to evaluate all the test chambers your smarter coworkers are making. Wait, it gets better: I'll be right there with you. Every step of the way, whether the tests work or not, Cave'll be by your side, facing whatever life-threatening dangers we might run into out there.

And even better, I won't actually physically be there. I'll be here, talking into a microphone, from complete and total safety. That way the people who'll be monitoring whether you're still alive won't have to split their focus worrying about me. So there you have it. 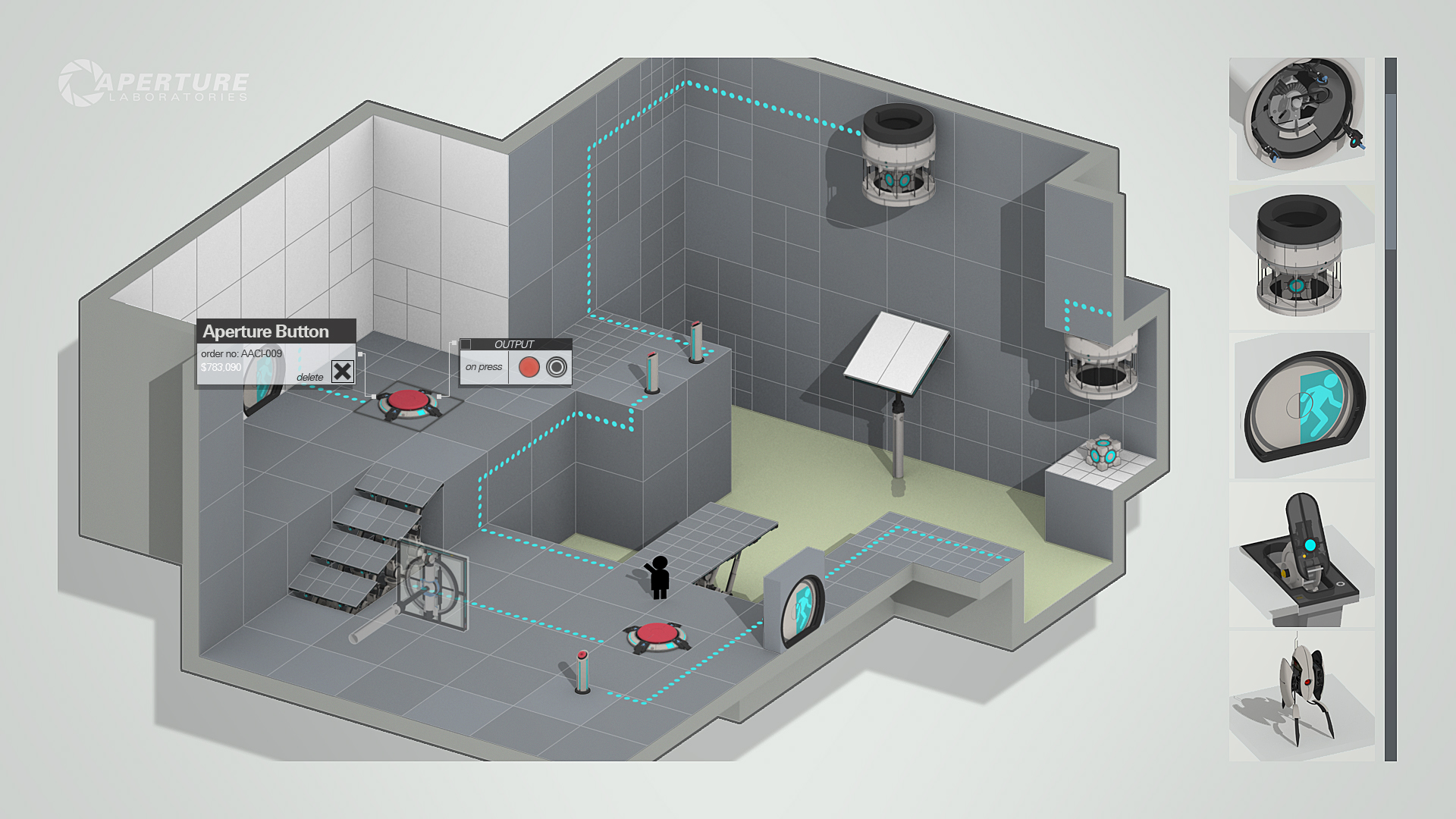 Everyone's useful in the Perpetual Testing Initiative. Except Peter Jenkins, which brings me to the point of this memo: Pete, you're fired. Alright, that should wrap it up. Everybody except Pete get back to work when this sentence finishes The gaming press have chimed in on our new free Puzzle Maker, available May 8th, and the verdict is unanimous: It is NOT complicated to make your very own Portal test chambers. Is our Puzzle Maker really this easy to use, or are these guys just bald-faced liars?

Here's the basic map template you start with. Note: This is not step one. On the left, you can select from any of the puzzle elements from Portal 2. Okay, now we're at Step One. If you have a friend helping you count, tell them to start now. Let's choose a big red button and place it somewhere on the map.

Step Two: Connect the button to the door.

Oh, man, we're already up to two steps. We better get moving. Seriously, we might have over-promised on this. Step Three: Surprise! We're throwing this step away. That's how confident we are. Step Five: Now we're going to rebuild our map to see it in action. Seconds later, it works! We did it. The gaming press are not liars. It's time to publish it to the Steam Workshop.

You can share your puzzle with everyone, or just share it with friends, or even keep it private until you think it's ready. This is obviously a very, very, very, simple map. But don't worry: the Puzzle Maker is as powerful as it is easy to use. You'll be designing complex brain-busters in no time, trust us.


In fact, you don't even have to trust us. The Perpetual Testing Initiative's still in beta, and people have already been hard at work making great science. Three months ago Skyrim unleashed the Creation Kit on Steam. Not only did it let users create amazing mods for an amazing game, it allowed them to browse, download, and share those mods using the Steam Workshop. February 7, - The Portal 2 Team. The Steam Workshop, which lets users publish and download custom mods, is now available for Skyrim. Also, since Skyrim was the only major release of without Nolan North in it, you should consider this mod a patch to fix that problem.

You can now feel free to include Skyrim in the "Nolan North" section of your video game library, which is to say, your video game library. More Sales, More Awards! December 20, - The Portal 2 Team. We can't say for sure if we came in second, but we definitely didn't win, so Wheatley's acceptance speech was never aired. Until now! Speaking of not winning, guess who didn't win Destructoid's Game of the Year. If you guessed Portal 2, we hope you didn't actually call your local sports book and put any money on that guess, because we won!

Look, we understand that awards season is a turbulent emotional hell ride. But you know what would probably make you feel better? Buying things. It just feels good. With that in mind, we've put a bunch of Portal 2 merchandise on sale. Frankly, there's figuratively literally too much Portal 2 stuff on sale to list in one blog post, but you can check it all out here. And just so you don't think all we're trying to do is sell you stuff, here's a sentence where we don't try to sell you anything.

Now that that's over, J! Finally, do you like Portal 2? If the answer to that question is "no", then, man, did you make a wrong turn somewhere on the Internet. For everyone else, how would you like to celebrate those warm feelings every time you move your mouse? Because now that's possible with SteelSeries' new Portal 2 mousepad. It won't be available to order until tomorrow. December 19, - The Portal 2 Team. How'd things turn out?

Macworld - News, tips, and reviews from the Apple experts

Well, you'll be happy to learn, we just barely lost both of them, helping cement our frankly historic dominance of the Second Best Game of the Year category. And the good news doesn't end there: We also grabbed the number two spot in Paste Magazine's first annual GOTY list , while clawing our way to a dramatic second place victory on C-Net. You can't not win them all. If you're paying in US dollars, that means you can buy Portal 2 right now for seven dollars and fifty cents! If you're paying in non-US dollars, you'll have to boot up a spreadsheet and do the math yourself, but we guarantee the result will be just as startling.

https://kogambvafor.ga And if you already own Portal 2, might we suggest you buy a few copies to give away as gifts? Well, unless you somehow skipped the last couple sentences, too late - it's suggested.


Good luck getting the idea out of your head. You may as well buy some copies before it drives you insane. Sure, it's the second best gift you can give this season, but at a price you'd expect from the seventeenth or eighteenth best gift. Plus, let's say you give someone the number one game of the year.

How are you going to top that next year?

You'll have to buy them a car. Be smart about this. The Awardening Begins! December 8, - The Portal 2 Team. 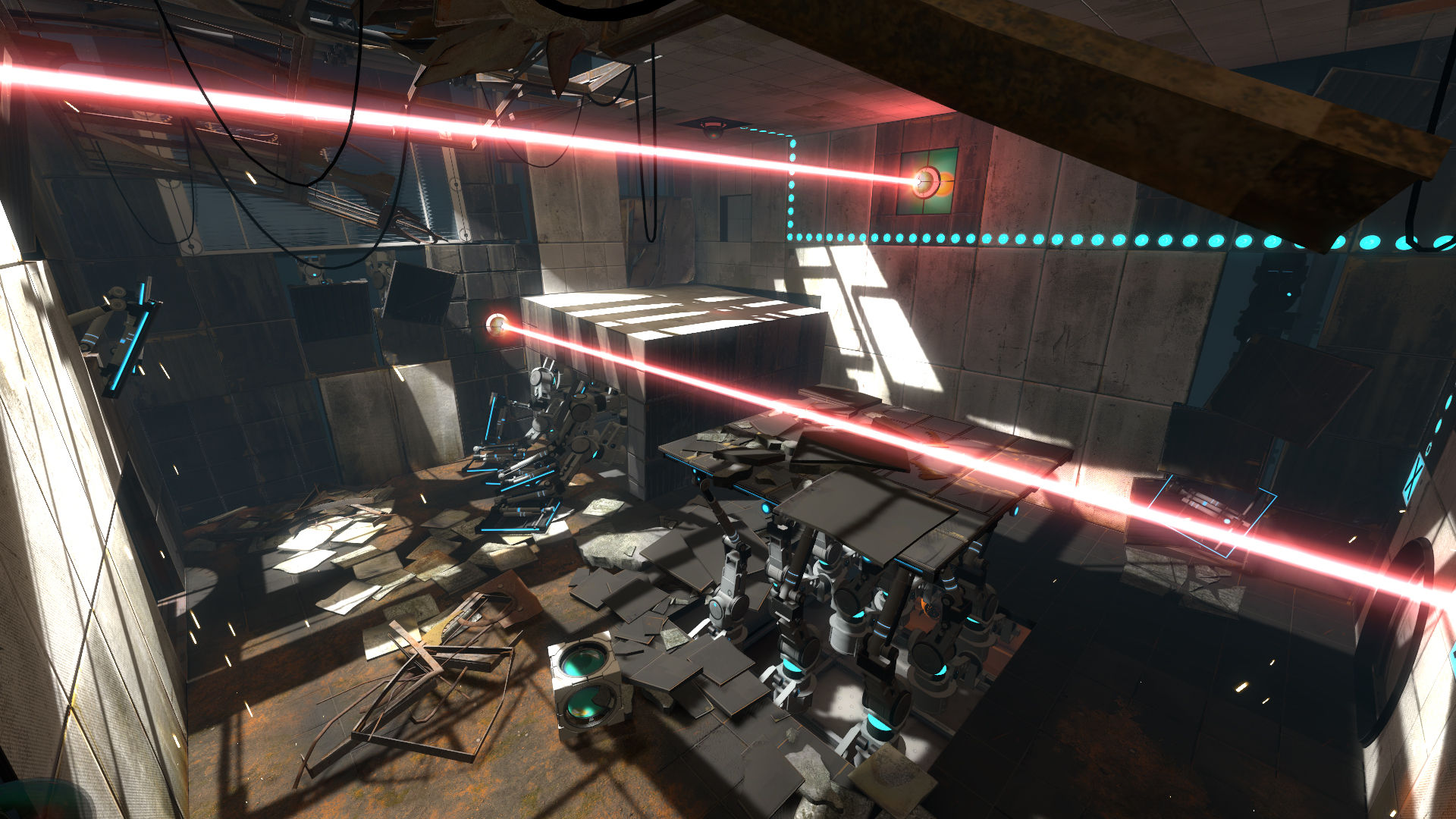 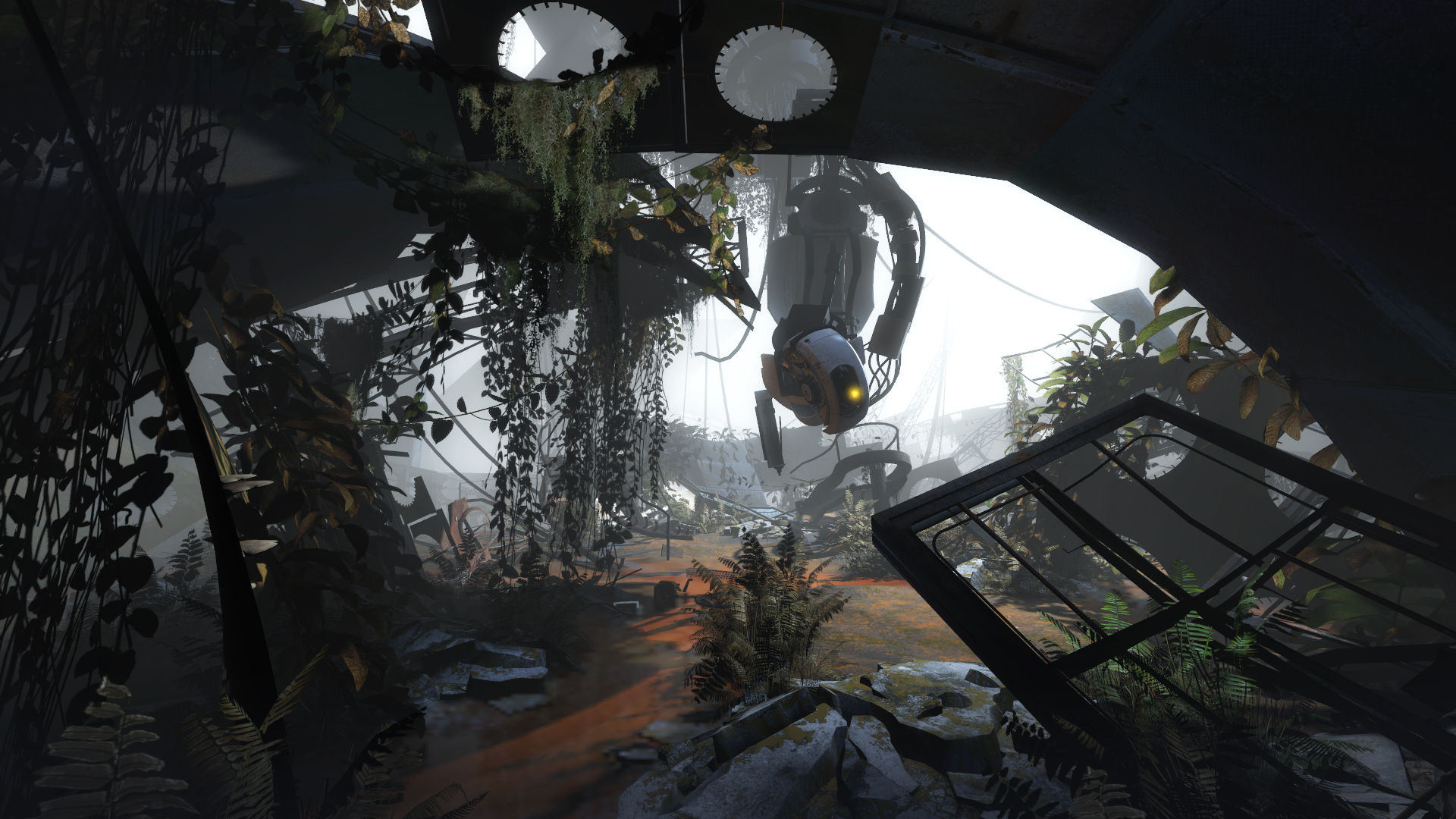 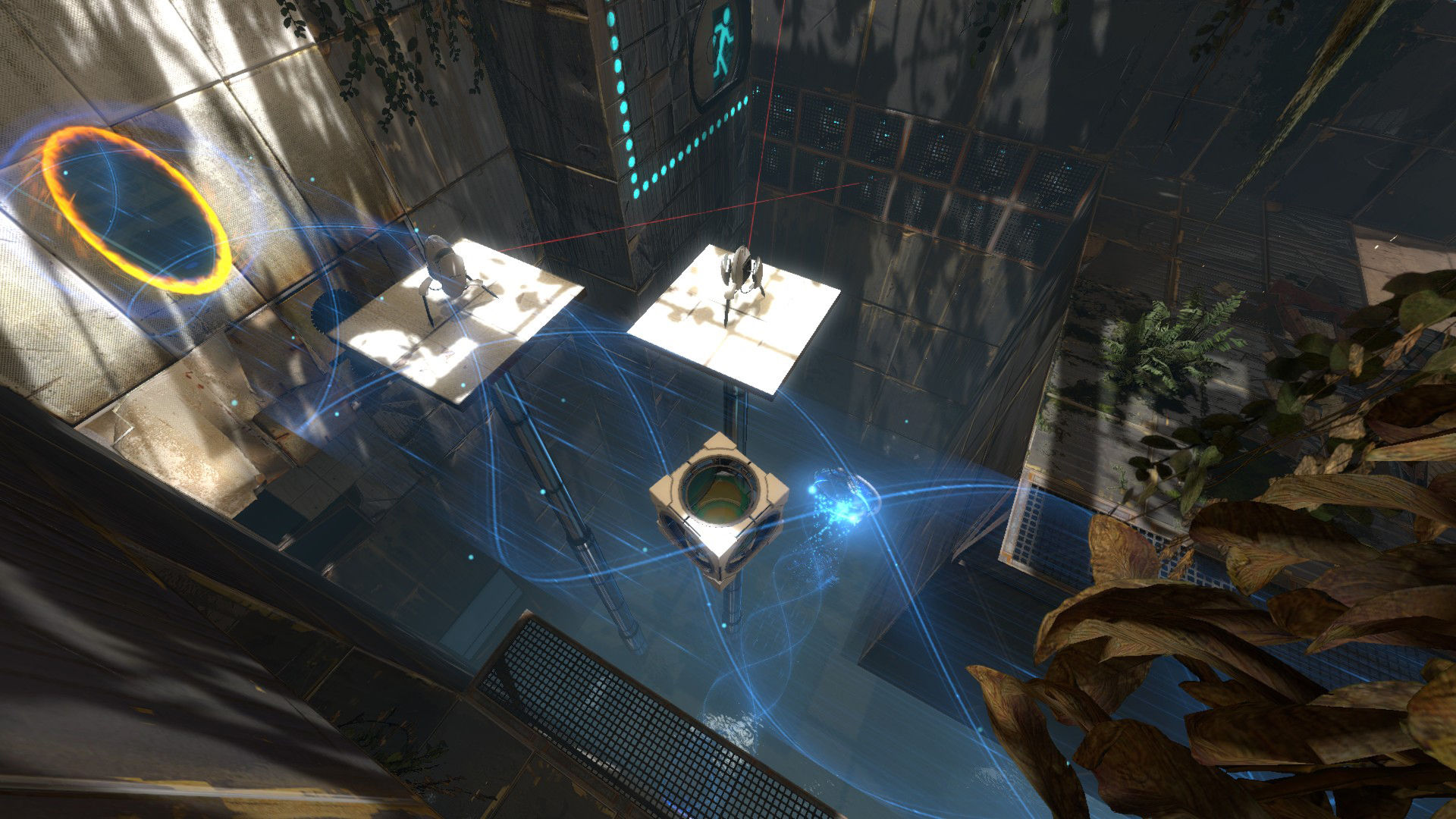 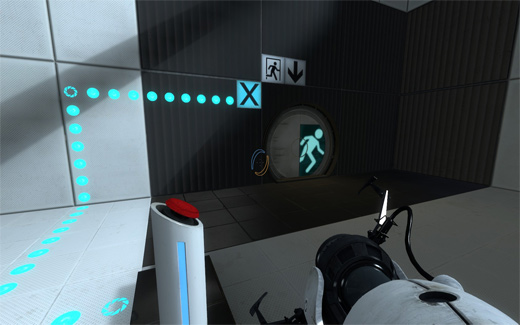